Why are people in different places on the Personality Map?

The distance people are from the center of the Personality Map refers to their intensity. Profiles that are closest to the edge of the map are most intense, while profiles closer to the center are least intense. When someone has a strong intensity in their personality, they are likely to mostly exhibit traits associated with their type. If someone has less intensity, they may be more likely to exhibit a mix of traits from other types, as well as their own.

For example, this person, close to the center of the map, is likely a less intense Planner than one who is closer to the outside of the map.

On the other hand, this person seems to be an intense Driver, since they are near the outside of the personality map, who likely exhibits most traits associated with the personality type. 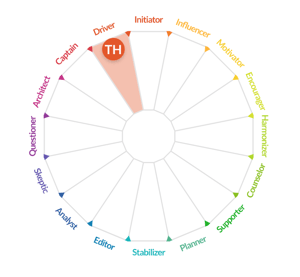